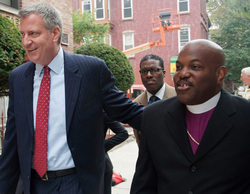 A day after New York Mayor Bill de Blasio’s Tale of Two Cities address in which the wealthy Park Slope resident once again made inequality his focus, the radical pol intervened to spring one of his biggest supporters from prison. The New York Post responded by putting, “A Jail of Two Cities” on its front page. Aside from being the commonplace corruption that one ought to expect from a politician trying to ban horses in Central Park because a wealthy real estate magnate wants to seize their stables, the Jail of Two Cities also reveals why government wars against inequality are a dead end.

When government is big, then the true inequality is not of wealth, but of political access. Money can buy you access, or as the recently released Orlando Findlayter discovered, so can being an activist who bets on the right horse-hating politician. The rich can write a check, but the poor can vote early and often. Access isn’t about money; it’s about becoming useful to those in power.

There are two cities and two countries in America; the land of the politically connected who are part of a network that can score anything from millions in cash to open door prisons and the land of the politically unconnected who don’t understand why the government won’t leave them alone. It won’t leave them alone because in a corrupt system, being left alone is a special political favor.

Obama handed out hundreds of millions to the Green Energy tycoons who supported him and dispenses ambassadorships to unqualified bundlers who barely know the name of the major country they have been assigned to. Voters who came out in collective groups for Obama got wealth redistribution paydays. Everyone else got taxed.

There is no equality of access even within the ranks of his supporters. The Obama voter was rewarded with ObamaCare, but the ObamaCare website was outsourced to an incompetent company whose top executive was a pal of Michelle Obama. The company got a six hundred million dollar contract and the ObamaPhone voters got a broken website and hours on hold.

Government works when it’s held accountable. Inequality campaigners avoid accountability by assembling a base of enthusiastic voters who come out in large percentages to score special access. Those voters are hard to beat because, like the politicians they vote for, they take bribes, using their votes to gain insider access in a corrupt system while ruining it for everyone else.

They take the bribes and then complain that nothing works. And they’re the reason why. Their corrupt choices are why the sidewalks are cracked, the streetlights don’t turn on at night, the firefighters don’t show up and the pension fund is empty. They have become complicit in a corrupt system that encourages them to take advantage of others even as it takes advantage of them.

A thief is still a thief whether he wears a mask, a suit or a t-shirt with a social justice slogan. When people appoint thieves to steal for them, they shouldn’t be surprised when the thieves also steal from them. As the scorpion said to the frog, “You knew what I was when you let me ride.”

Corruption and ineptitude are far more of a threat to the progressive vision than any number of people waving Gadsden flags. Republicans can shut down a progressive program, but only progressives can discredit it from the inside the way that Obama has done with ObamaCare; taking it apart piece by piece to cover for his incompetence and appease pieces of his coalition.

The urban and rural political centers of the Democratic Party are places where the progressive vision lies dead and buried with a stake through its rotten heart while its zombie policy corpse shambles around decaying streets moaning, “Money, money, money.”

It doesn’t take the Koch Brothers to kill the left. Letting the left have what it wants does it much more devastatingly, but with more collateral damage.

Campaigns against income inequality invariably become mandates for corruption as aggrieved voters convinced that the system is rigged against them embrace the unfair advantage that they believe they are owed and politicians escape accountability from their own corrupt voters because every crime they commit is officially for the benefit of the underclass.

Even after the fall of the USSR, $400 billion in bribes are paid out annually. Russians bribe their officials for access. Americans bundle donations to them. The more power a government has over its people, the more people are willing to pay for access to those who hold power over them.

The cycle of corruption follows its own inevitable momentum. The more people come to believe that a system is corrupt, the fewer will vote for honest politicians over the crooks who promise them special benefits. Everyone becomes cynical and complicit in the corruption. Politicians play divide and conquer, redistributing wealth from some groups to other groups. Trust vanishes from government and financial institutions. Everyone suspects everyone else… and everyone steals.

That is the formula for a failed nation, a failed city and a failed community. A society is built on confidence in its institutions and its people. When that confidence falls apart, then nothing works and everyone has someone to blame. Social justice politicians begin by telling a tale of two cities and end by locking up everyone in a jail of two cities to which they alone hold the key.