Queen is joined by top officials in the place where King John was forced to seal historic document that underpins modern democracy and human rights
Royalty returned to Runnymede 800 years after a group of rebellious barons forced a medieval king to put his seal on a historic document that established the foundations of parliamentary democracy, human rights and the supremacy of law.

Eight centuries after the sealing of Magna Carta by King John in a boggy meadow on the banks of the Thames in Surrey, the Queen joined thousands on Monday who had travelled from around the world to stand in that field to mark the anniversary with a ceremony heavy on symbolism, speeches and flags.

In a written message, the 89-year-old monarch, patron of the Magna Carta Trust, said: “Runnymede is an ancient and resonant meeting place and it is fitting that we should assemble again here where the Great Charter was sealed 800 years ago.

“The story of the British monarchy is intertwined with that of Runnymede and Magna Carta. The values of Magna Carta are not just important to the United Kingdom and the Commonwealth, but across the world. Its principle are significant and enduring.” 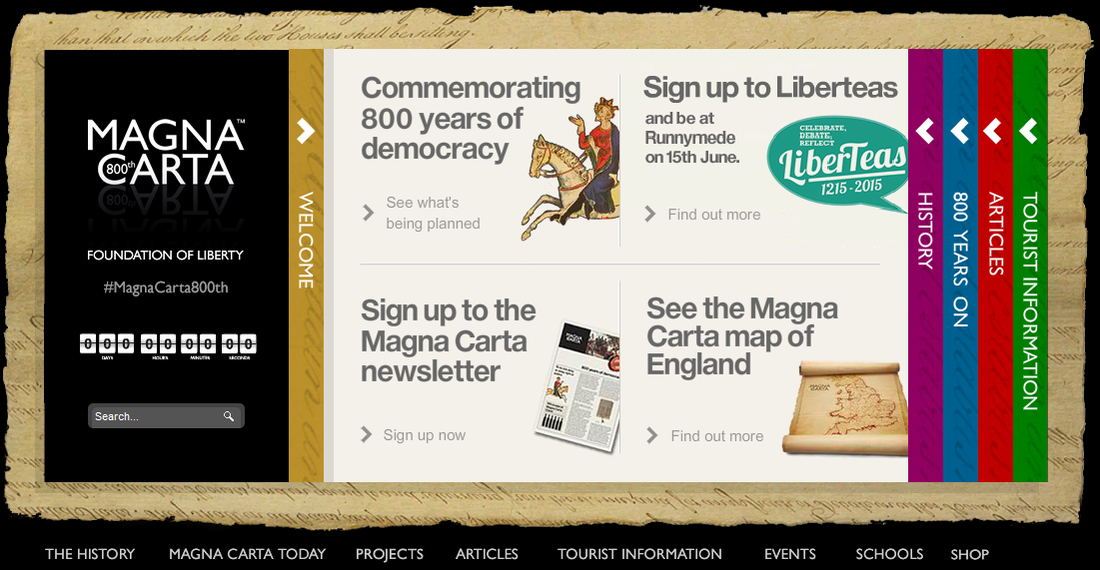 The 4th of July bunting on the porch has been put away and the house cleaned up after the celebration with friends: what better time to reread the Magna Carta and think about American governance on this, the 800th anniversary of The Magna Carta?

In 1215 AD, King Henry III of England, a very unpopular King, met with a group of rebel barons at Runnymeade, a wet-meadow on the S. Bank of the Thames River to make peace.  In a matter of days they agreed to a “Great Charter” or Magna Carta that had been drafted by the Archbishop of Canterbury.  The King signed the document (written in Latin in iron gall ink on parchment) that was copied by monks and distributed to the barons to be read to all Englishmen at Mass and in public squares.  There are but a few of these copies still in existence.  Though neither side upheld the agreement and subsequent Charters (1216, 1217, 1225, & 1297) came and went with current affairs, a certain statement of the limited powers of government (as in the King being subject to the law) and the rights of “free men” (barons) began working its way through history forming the Charters of the King for the 13 Colonies in America and eventually their bold Constitution defining the United State of America.

Echoes of the barons’ oath to “liberty, Church and realm” can be traced to the ringing words in the Declaration of Independence that, “When in the Course of human events it becomes necessary … to dissolve the political bands which have connected them”  and “We hold these truths to be self-evident, that all men are created equal, that they are endowed by their Creator with certain unalienable Rights”, as well as in the Preamble to the US Constitution that, “We the People of the United States, in order to… establish Justice, … and secure the Blessings of Liberty to ourselves and our Posterity do ordain and establish”.

Of the 60 or so clauses in the Charter, half concerned immediate matters for the King and barons that disappeared quickly in subsequent charters.

The first 8 clauses were protections for landowners from government abuse in everything from taxes to inheritances and the rights of widows and very young heirs.  The fact that Property Rights were truly first and foremost is a reminder of the historic and enduring nature of this most basic of all rights, without which the others begin to pale and erode.

Clause 14 defined what we have come to know as “Representative Government”, i.e. a common council or Parliament or in our case a Congress; and the principle of “no taxation without representation”.

Clauses 17 through 32 are concerned with seizures, courts, prosecutions and officials like sheriffs and constables.

Clause 33 directed that all weirs (i.e. fish traps) be removed from rivers except on the sea coast.  This was to make rivers more efficient travel-ways for people and commerce.

Clauses 34 through 45 speak of the rights of persons accused in courts as well as protections of merchants and the behavior and qualifications of those enforcing the law. The concept of the presumption of innocence until proven guilty was first inferred here.

Clauses 47 and 48 reclaim all forests and riverbanks as property of landowners and all “evil customs are to be abolished completely and irrevocably”.  No longer could the King or anyone other than the landowner cut wood or take game on the land of another.

Clause 51 directs the removal of “all the foreign knights and their attendants”.

Clauses 52 through 59 concern how you can only be deprived of lands, castles, liberties or rights with the lawful judgment of equals”.  They also guarantee these rights to Welshmen while stating that, “No one shall be arrested or imprisoned on the appeal of a woman for the death of any person except her husband.”

While the Charter was high-sounding in many regards, peasants or “villeins” remained under the jurisdiction of barons and the granting of these rights and guarantees to “all men” was neither contemplated or in all likelihood even imaginable at this time.

So today the United States of America is governed by a Constitution that owes much to the Magna Carta.

-       The 1st Amendment authorizes the right “to petition the government for redress of grievances”.

-       The 4th Amendment forbids “unreasonable searches” and demands “no Warrants shall issue, but upon probable cause”.

-       The 5th Amendment forbids being tried “twice”; being “deprived of life, liberty, or property without due process of law”; and that it affirms the bedrock right, “nor shall private property be taken for public use, without just compensation.”

-       The 6th Amendment guarantees a “speedy and public trial by an impartial jury”.

-       The 14th Amendment forbids the States from depriving “any person of life, liberty, or property, without due process of law; nor to deny to any person within its jurisdiction the equal protection of the laws.”

Today, the President ignores the Constitution and many laws with impunity.  The Congress (envisioned as a common council or Parliament)is made up of career politicians of two parties, each of which enables (differing only in speed) the nation’s shift into a monolithic central government that controls all aspects of daily life at the behest of the President like the bureaucrats of ancient Kings and recent foreign dictators.  The Supreme Court actually adds words to legislation to make laws fit desired political goals while “discovering” “penumbras and emanations” authorizing things never imagined or considered, much less mentioned, by the authors of the Constitution.  What the Constitution described as 3 branches of government (“checks and balances”) have regressed into one Washington monolithic ruling machine more like King John than George Washington.

Governors are the closest things left in the US that could force Washington to some American Runnymeade to realign the debilitating power that is eroding the nation and its citizens, but that seems unlikely.  The Jerry Browns and Daniel Malloys are typical of 1/3 of their fellow Governors in that they despise the Constitution, spend money like drunken sailors, and want to be just like the President when they grow up.  Another third, like the Nixons and Hickenloopers are about as likely to do anything other than angle for federal money and tickle federal backs as a duck is to attack a fox.  The last third, the Walkers and Pences are the fighters with Magna Carta/Constitution values and the ones that give us hope.  If not any of these, can a Dr. Carson or Donald Trump offer hope?  I know not.

-       Federal politicians that take an oath to uphold the Constitution and then work to destroy the Bill of Rights unilaterally outside prescribed processes?

-       A Supreme Court that is no more “blind” like that statue with the scale than Chicago politicians dividing up a budget?

-       Rogue agencies like EPA claiming jurisdiction over all waters of the US, barring the use of coal for power, closing the last lead smelter in the nation; a Forest Service that gobbles up more and more land to be closed down and left unmanaged; a US Fish and Wildlife Service that takes land not for a public use without compensation and has reinstituted the claims of King John and his predecessors over game and forests; and an IRS and DOJ that work to destroy political opponents of the President?

-       Laws granting race and sex preferences to government-designated groups much like King John had for Normans, Saxons, Welchmen, etc.

-       Spending distortions and program anomalies like welfare increases at the expense of Defense capabilities in an increasingly dangerous world?

-       Private property being steadily swallowed up by a government that already owns or controls over half the nation?

-       Scandals like Fast and Furious and destruction of records by bureaucracies and politicians that go unpunished?

Can we resolve these things and somehow restore what we have lost during the last century and are losing today at an accelerating pace?

Remembering the Magna Carta and fairly judging US governance today, 800 years later, leads to only one conclusion.  Where did we go wrong?  How did this happen?  How can we get back on the road to good governance that we once had and let slip away?  Is it even possible, short of a rebellion like the ones that birthed the Magna Carta and the US Constitution?