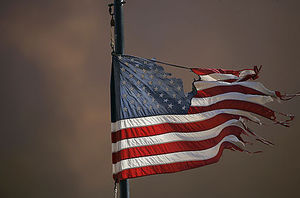 30 Examples of Why America Is No Longer a Free Country

Nanny state is no longer on steroids, it has turned into the Incredible Hulk

From people being harassed for paying by cash or having a food garden, to Americans being arrested for letting their children play outside – innumerable examples over the past few months alone illustrate that the United States is no longer a free country.

The nanny state is no longer just on steroids, it has turned into the Incredible Hulk as collectivism, pernicious bureaucracy, regulation, mass surveillance and outright tyranny runs wild across the country.

Here are just a selection of stories from scores of recent examples illustrating how America is ‘land of the Free, home of the brave’ no more.

- Parents across the country are being arrested for letting their children play outside. A stay at home mom in Texas was held in jail for 18 hours for allowing her children to ride on scooters while she was watching them from her home. A mother in Virginia was also harassed by social services and police for the egregious crime of allowing their children to play outside in another example of how the nanny state is running wild in America.

- The war on lemonade stands, traditionally viewed as a quaint example of America’s entrepreneurial spirit, has intensified in recent months with cops slapping parents with fines for letting their kids run “unlicensed” lemonade stands in three separate incidents over the last year alone. A map of restrictions on child-run concession stands illustrates how there have been dozens of examples of police interference across the country.

- After an 11-year battle with the state of Oregon, landowner Gary Harrington was found guilty under a 1925 law and sentenced to spend 30 days in jail for collecting rainwater in three “illegal reservoirs” despite the fact that they are on his property.

- Americans are being harassed by utility workers who are trespassing on private property and forcibly trying to install “smart” energy meters which spy on homeowners.

- Cities are passing ordinances that makes recycling compulsory from, with those who fail to comply under threat of fines up to $2500 dollars. In Cleveland, people who fail to recycle are flagged by the RFID chip embedded in their trash can, added to a database and then targeted by green cops who are dispatched to intimidate homeowners.

- The Eleventh Circuit US Court of Appeals has ruled that private contractors operating toll roads on behalf of the state have the power to detain and store records on motorists who pay by cash at toll booths – another example of how using cash is increasingly being treated as a suspicious activity.

- Earlier this year we reported on how the FBI was telling businesses to treat people who use cash to pay for a cup of coffee as potential terrorists.

- We also recently highlighted the case of Texas resident Julia Garcia, who was falsely imprisoned and harassed by Wal-Mart employees for attempting to buy goods with a $100 dollar bill the Wal-Mart cashiers erroneously claimed was fake.

- Earlier this year a Tennessee man was charged and jailed by police after using an old $50 bill to pay for goods at a Quik Mart store which turned out to be genuine.

- A DOJ-funded police training manual tells cops to treat people who have a political opinion that “represents a fairly popular point of view” or those who display a political bumper sticker supporting the bill of rights as terrorists.

- The Obama administration has successfully reinstated the indefinite detention provisions of the National Defense Authorization Act, which allow American citizens to be kidnapped and held without charge.

- The TSA has expanded its grope-down checkpoints beyond the airports to highways, political events and even school prom nights.

- The TSA is kicking Americans off flights for having a “bad attitude” and refusing to obey bizarre orders quickly enough.

- A teenager was recently visited by FBI special agents who grilled him over the content of a political You Tube video.

- Americans are being harassed and having their Fourth Amendment rights violated at so-called “border checkpoints” which are actually hundreds of miles within the border.

- The EPA is using spy drones to monitor farms as police use Predator drones to hunt down Americans for the crime of allowing cows to wander onto their land.

- Parents are being harassed and investigated by Child Protective Services and police for feeding his daughters organic food, refusing to make them drink fluoride-poisoned tap water and not having them injected with mercury-laden vaccines.

- A Texas police officer shot 45-year-old double amputee Brian Claunch dead after he threatened officers with what turned out to be a ballpoint pen.

- While the government stockpiles ammo in the billions, Americans like Brian Loftus are being questioned by police for buying a couple of boxes of bullets at their local gun store.

- Americans like James Ian Tyson are being put on terror watchlists in response to traffic violations in order to prevent them from attending protests.

- Students in schools across the country are being indoctrinated to accept their treatment as prisoners on parole by being forced to wear RFID tracking chips.

- Police departments are attempting to secure approval to spy on Americans with drones as well as surveillance blimps that hover 400 feet above a city and report on “suspicious activity.”

- The Californian city of Lancaster will be the first to experience a “new era in law enforcement surveillance” with residents set to be watched by a permanent eye in the sky which will beam constant video footage back to police headquarters including crimes in progress as well as “scenes of mundane day-to-day life.”

- The National Security Agency is storing all electronic communications and analyzing them in real time in complete violation of the Fourth Amendment.

- Facebook is spying on people’s private conversations for “suspicious behavior” and reporting them to police.

- Former Marine Brandon Raub was kidnapped from his home by police, FBI and Secret Service agents and forcibly incarcerated in a psychiatric ward by authorities in Virginia in response to political Facebook posts.

- Veterans across the country are being declared “mentally defective” on a whim by the state and having their firearms seized.

- The federal government is officially backing Al-Qaeda fighters in Syria while declaring conservative Americans to be extremists and terrorists if they are “reverent of individual liberty.”

Land of the free, home of the brave?

Most of the these stories are just from the last few months alone.

America is no longer a free country.

The state has declared war on the American people.

Paul Joseph Watson is the editor and writer for Prison Planet.com. He is the author of Order Out Of Chaos. Watson is also a regular fill-in host for The Alex Jones Show and Infowars Nightly News.